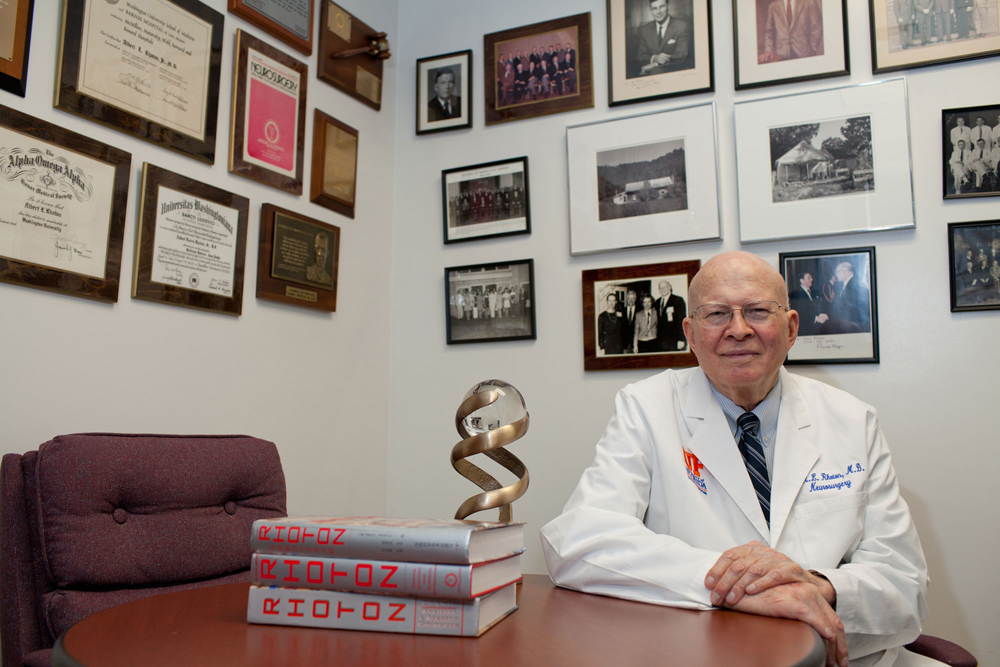 It is my honor to announce that the Dandy 2016 Medal was awarded to Professor Albert L. Rhoton posthumously this past Saturday, November 12th. Dr. Eric Rhoton, neurosurgeon, officially accepted the medal on behalf of his late father. The ceremony took place during the 5th Annual Dandy Meeting, Santa Monica, CA, USA.

It is a sincere honor for me to announce that Professor Ghaus Malik has been selected by the Dandy Medal Nominating Committee as the official recipient of the 2015 medal.

As the first President of this Society, I had the honor to provide to the Dandy Medal Nominating Committee the guidelines for the Medal. These guidelines are based on three main qualifications:

The Dandy Medal Nominating Committee receives nominations from neurosurgical societies and neurosurgeons worldwide. The chosen medalist’s mastery is based on attestations by his or her peers within said discipline. The Committee through review of the nominees’ publications judges pioneering scholarly work. The mentorship is substantiated by attestations made by the trainees of the nominee.

Professor Malik is an authority in cerebrovascular surgery and a recognized master in AVM surgery, in which he has one of the largest series in the world over the past 3 decades. His original work on AVMs has had an impact on the surgical treatment of these lesions. The testimonies of his former residents, who are currently in practice throughout the US, speak with deep respect and long lasting admiration that, to me, is the hallmark of those who truly guide our specialty.

The official Medal Ceremony will be held at the Dandy 2015 Annual Meeting in Dubai on November 21st.

It is with deep sadness that we must report to you that Professor Atos Alves de Sousa passed away this last Sunday from a heart attack at age 66.

He was a loving husband, father, grandfather, and a mentor to a whole generation of neurosurgeons in Brazil.

“To me he was a friend, and he was a trusted advisor during the tumultuous time that marked the inception of the Dandy Society. I am honored to say that he was one of the founding members of our Society.”
-Professor Saleem I. Abdulrauf MD FACS
President
Walter E. Dandy Neurosurgical Society

With great pride we presented Professor Takeshi Kawase with the Dandy 2013 Medal in Milan, Italy on the evening of Friday, June 28th, 2013.

Professor Takeshi was given The medal during the Second Annual Meeting of The Dandy Society held in Milan, Italy. He was presented the medal for his monumental contributions to Operative Neurosurgery.

It is our honor to announce to you that Professor Jizong Zhao received the Dandy 2012 Medal in Hangzhou, China on October 12, 2012.

The medal was given during the joint meeting of the Chinese Neurosurgical Society and the First Annual Meeting of WEDNS held in Hangzhou, China. The joint meeting was a tremendous success and was attended by over 2500 neurosurgeons